Jakarta : An Indonesian man survived at sea for about two weeks clinging to a wooden board after his boat was rammed by a large ship, a rescue official said on Friday.

Muhammad Kartoyo, 18, was sailing with six other fishermen off Bali when their fishing boat was destroyed after being hit by what appeared to be a ferry, dpa news agency quoted Krisna Maharta, a spokesman for the search and rescue agency in Bali, as saying.

Kartoyo was rescued by fishermen on Tuesday in waters off Sulawesi island while clinging to a wooden board from the boat, Krisna said.

“They drifted for a week clinging to what was left of the boat but Kartoyo said one by one the other sailors drowned,” he said.

“Kartoyo did not remember clearly when the accident happened but it was believed to be March 9,” he added.

One other fisherman was found dead, while five others are still missing, according to the spokesman. 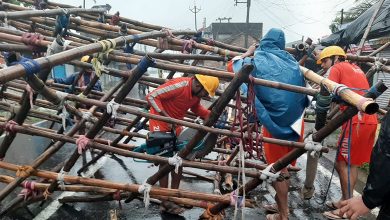